This article was first published in Food and Beverage Magazine.

In recent years, there has been an explosion of enthusiasm for blockchain technology. It seems that every industry has or wants a blockchain – but why? Brett Wiskar from Wiley talks to Food & Beverage Industry about the intricacies of this technology that is rising in popularity and how it can be utilised in the food industry.

Blockchain has been spoken and written about across industry press and the broader media for the past two years. This innovation is painted as some sort of future technology set to change the way industry manages itself, transacts and tracks product. If the general coverage is to be believed, blockchain is a panacea for anything we choose to apply it to. Like most things touted as a solution, the truth is less promising – so where does the value of blockchain lie? In this article, we explore what blockchain really is and how it can be used to best advantage in the food industry.

What is blockchain?
Blockchain is a technology that in one sense is not unlike a conventional database from a more traditional system. It stores information. This information is what all parties in the system agree it to store. The difference is, blockchain stores its data and records in a solution that is distributed and encrypted securely and provides transparency to all participants in the blockchain.

It’s perhaps easiest to think of blockchain as a way of keeping track of a transaction. This transaction may be financial, but it could just as easily be a transaction involving data point, product shipments, services, emails or other communications, documents, certificates, accreditations or just about anything that could be stored as data.
As is typically the case when the media develops an infatuation with a new piece of technology, blockchain is generally poorly understood. Often described as a distributed ledger, blockchain uses multiple redundant copies of the ledger, each hosted by a participant in the network or supply chain to ensure security. If a copy of the data with one of the participants is compromised (hacked/manipulated), that copy of the ledger is overruled by its peers (the other copies). In this way the system remains secure and can be trusted by all.

Trust through transparency
Frequently blockchain is described as a “trust-based” system. In truth, when digging a little deeper, it is clear the technology’s successes originate where the blockchain can generate value in markets where there is a lack of trust. When implemented well, blockchain allows people to trust other parties by providing visibility into the actions of the other party. This means participants don’t have to trust what each other say they’re doing, or have done, but can trust when the outcomes can be seen in the system.

Unfamiliarity and deceptive behaviour in transactions or interactions in businesses breeds distrust. If, however a business can see that other parties are performing as required, then distrust is mitigated and supply chains can move quickly as decisions can be made with confidence.

A true blockchain system ensures all participants in the system have the same data. This data is a snapshot in real-time of the status of the system (goods, finances, approvals etc.). Not only is there a snapshot, but everyone in the system has a copy of the truth and knows it is valid and has not been compromised by someone in the system attempting to deceive the other parties.

This means a party in the supply chain who is responsible for a step knows when they perform their action (e.g. approve the goods for export) and update the system, every other party in the system knows this has been completed and by who. Visibility through the system places the onus on the next party to perform their own subsequent responsibilities and this sequential visibility drives the behaviours in the supply chain all parties want to see.

A lot of the examples held up as case studies for how blockchain will change industry often lack some of the characteristics that make blockchain valuable. These are more likely technical proofs of concept for blockchain and not true examples. A little online research shows it’s clear that for blockchain to really create value it needs to be applied to the right kind of problem. A helpful checklist can be used to determine if blockchain could be an appropriate solution.

Do the requirements of the ecosystem considering blockchain have each of these?

There are many examples, around the globe of industries or value chains adopting or trialling the use of a blockchain solution. When we look at these it is clear that they do not always meet the threshold of the list above. Whether the use of blockchain was essential for a system or not, often the adoption is being driven by technology players like Oracle, SAP and IBM.

Walmart mandating that its suppliers comply with Global Food Safety Initiative (GFSI), and that this data be stored in a blockchain system, does not improve food traceability beyond that of a conventional database-backed solution.

Blockchain is not omnipresent and cannot magically watch product from the farm to the plate. Like any data storage system, blockchain needs inputs. It needs humans to interact with the platform. In this case, Walmart is introducing an onboarding system that allows people to interact with the blockchain solution. This onboarding unifies the ways in which people keep track of product in the supply chain. This unified data input is the real challenge Walmart’s blockchain implementation is overcoming. The way it tracks the data once it gets into the system is irrelevant, its achievement is putting the information onto a computer. In truth, Walmart’s market force enabled the company to make compliance with its systems and the collection and input of data mandatory, but this could have been supported through a traditional database system.

What does it mean for industry?
The amount of hype around blockchain is yet to be matched by the scale of investment or the proliferation of systems. Although this means blockchain is not ready for wide adoption yet, there are enough indicators to show that its right around the corner. The biggest technology names are on board and working with government, finance, defence and the large corporations to bring about massive change to how we track, transact and manage our supply chains and monetary systems. There may be another 10 years of time to maturity of industry blockchain systems, or maybe only another two years, but it seems the value blockchain creates will make a significant contribution to the markets that adopt it. This means blockchain running part of our value systems is only a matter of time. 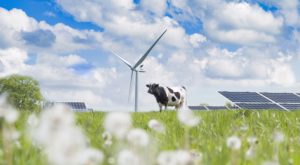